Nicole and Ryan Murphy are the owners of Grace Yoga. 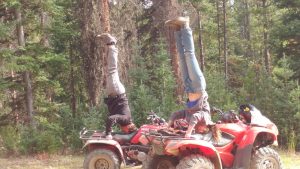 During the economic downfall, Nicole and Ryan were living on the Western Slope with their baby daughter. Living away from family and friends was hard so they decided to move back the Front Range. They were quickly frustrated because they couldn’t sell their house and they didn’t know what to do. So Nicole started to pray. What to pray for was the big question–to sell the house, to have more money, to have less stress? … Nicole decided to pray for grace.

Nicole was surprised that teaching yoga was the answer to the prayer for grace. Nicole had spent 4 years in the US Air Force as a mechanic, and just graduated with a BA in Horticulture, so why yoga? Nicole felt a calling. Even though they didn’t have the money she decided to sign up for teacher training. As soon as she signed up everything changed. Grace came! Their house sold fast, Nicole and Ryan both found good jobs, and Grace Yoga LLC was formed.​ Life has been getting better and better … with grace and yoga.​

Learn more about Our Teachers →